Cooliris CEO, Soujanya Bhumkar in the press release said, “Mobile users expect performance and simplicity along with the ability to express themselves using their phones. We believe that the communication experience should be delightful and cross-platform, and our team has worked diligently to create a ubiquitous experience across Web, Android, and iOS. This all-new version for Android accomplishes that goal.”

LiveShare will compete directly with prominent messaging app like WhatsApp, KakaoTalk or LINE that mostly already available in multiple smartphone platforms, including Windows Phone and BlackBerry. There are also popular single platform messaging apps, for example BlackBerry Messenger and iMessage.

Previously, it was a mobile social app focusing on photo sharing and having around 4 million users, until the whole realm is totally scrapped by Instagram. Hence, it made pivotal step to messaging genre

At beginning, LiveShare messaging app was only built for iOS. Check out my thought about it. We’re still in doubt whether LiveShare would successfully survive in this category for longer term. Here’s a screenshot of new LiveShare for Android: 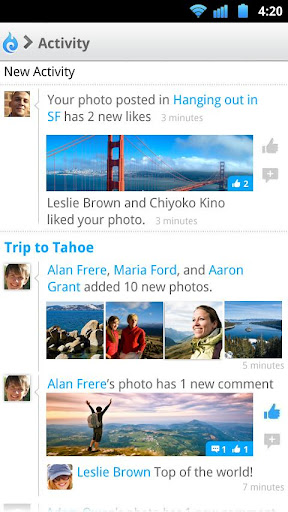